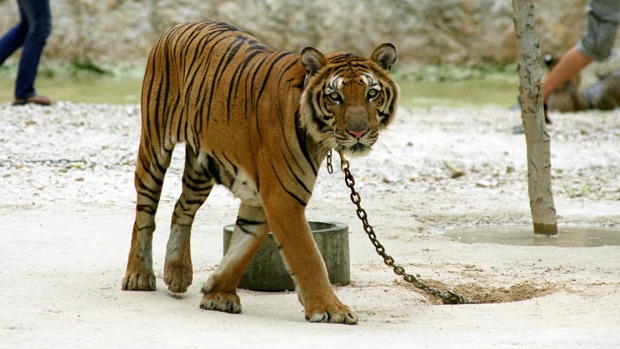 June 2016, Thailand’s largest tiger sanctuary, Tiger Temple, was raided amid allegations of illegal wildlife trafficking, animal cruelty, illegal breeding, connections with the fur industry and illegal trade of animal body parts.[iii]  Tiger Temple was one of the many animal sanctuaries that falsely marketed itself as an aid to tiger conservation.  They allowed tourist to interact with, pet and take photos with tigers of all ages.  An investigation into Tiger Temple found that tigers were often beaten and deprived of food and water to reinforce the dominance of their trainers.  The investigation also found a freezer stacked with the carcasses of 40 cubs; 20 more cubs floating in jars of formaldehyde; tiger pelts; some 1,500 tiger skin amulets; and other wildlife products.[iv]  The 137 tigers from Tiger Temple were confiscated by the Thai government and put in safe facilities, yet National Geographic explains Tiger Temple is changing its name to Golden Tiger and has requested to buy the tigers back from the Thai government.  If the Thai government accepts their request the tigers could once again be abused and exploited against their will for tourism entertainment.

Thailand has around 2,500 tigers in more than 30 legal breeding facilities.[v]  Today the world’s largest active tiger sanctuary in Thailand is known as Tiger Kingdom. The tigers at Tiger Kingdom are forced to live lives contrary to their ethological nature.  In nature tigers essentially live solitary lives, except during mating season.  They are fiercely territorial and mark their large home ranges of 50-100 sq. km.[vi]  The tigers at Tiger Kingdom are restricted to live in a small unnatural settings with many other tigers.  The tiger cubs are taken from their mothers immediately after birth and exploited by handlers and then tourists who over-feed them, pet and take photos with them.  This may cause them great physical stress.[vii]  Tourists claim to have seen the captive tigers in Tiger Kingdom indicate behaviors of stress such as crying, pacing and head bobbing. 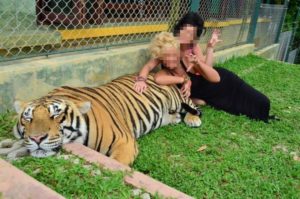 Tiger Kingdom’s goal is to increase the population of captive bred tigers and Tiger Kingdom states their tigers will remain in captivity from birth to death.[viii]  Tiger Kingdom continuously has an abundance of baby tiger cubs ready to be exploited by tourists and a small population of adult tigers. This raises the question where do the tigers go once they reach adolescence and they are too aggressive to be in contact with tourist?  Animal welfare advocates are suspicious of Tiger Kingdom’s breeding operations, given that tiger body parts are economically valuable and Thailand has a history of illegal wildlife trafficking.  In response, Tiger Kingdom states they are constructing a facility off limits to tourist, where they will house the adolescent and adult tigers.  Unfortunately, this private facility will not be opened to the public nor controlled by the Thai government leaving us with great suspicions the tigers will live in poor conditions. viii  What is the quality of life for hundreds or even thousands of adult tigers that are to be put in a fenced facility for the rest of their life, solely for the purpose of being exploited as cubs for entertainment tourism?

[vii] Pitzko, Leigh E. “Wild Tigers in Captivity: A Study of the Effects of the Captive Environment on Tiger Behavior.” Master of Science in Geography 2003.

Sign to End the Abuse and Intense Breeding of Captive Tigers

An investigation into Tiger Kingdom, in Thailand, found that tigers were confided in small cages, the cubs were taken from their mothers soon after birth, and deprived of food and water to reinforce the dominance of their trainers. It is a huge red flag when facilities encourage you to take selfies, feed, and play with wild animals. If you see trainers who carry sticks or weapons to “tame” the animals, this is also another red flag that these animals have been trained to associate these sticks with pain and their sight will encourage their submissive behavior.

Ministry of Natural Resources and Environment