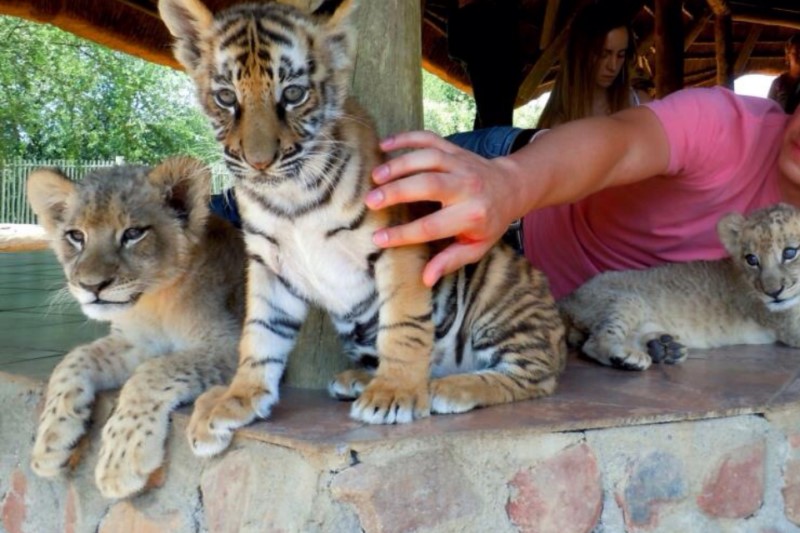 In the country of South Africa lions are being exploited and abused for tourism similar to tigers in Asia.  Throughout South Africa there are numerous tourist destinations where one can pet and feed lion cubs, take a walk with lions, and volunteer to raise lion cubs.  Many facilities will falsely advertise their center as a sanctuary to help lion conservation by trying to legitimize the exploitation of lions for revenue. Once the lions reach adolescence they are sold to lion ranches where they will likely be killed for canned trophy hunting.  A canned lion hunt is a trophy hunt in which the lion is kept in a confined fenced-in area, waiting to be killed by a hunter.  The lion cub petting facilities and so-called lion sanctuaries in South Africa are directly linked to canned trophy hunting and not a single lion bred under the current captive conditions has any conservation value.ix

“there has never been a captive lion successfully released in the wild.  It’s been tried on numerous occasions, even to the expense of millions of dollars, but it’s not a valuable conservation option.”[ix]

Sadly it’s tourism that plays a major role in promoting all the abusive activities involved with breeding captive bred lions. Lion petting facilities and lion sanctuaries in South Africa prematurely remove lion cubs from their mothers, force lions to be subjected to abuse from tourists, and force the lions to live in overcrowded and unhygienic cages until they are sold as commodities.

There are more than 160 farms that legally breed big cats in South Africa.  There are now more lions held in captivity in South Africa, about 6,000, than lions that live in the wild, about 2,000).[x]  Ukutula is a ranch an hour north of Johannesburg that lures in tourist and volunteers under the false presumption that they intensely breed lions for research and conservation.  Parks such as Ukutula can reportedly earn up to $48,000 USD a month from volunteers staying at their lodge.  This does not include the revenue earned from day visitors at their petting zoos.[xi]  Ukutula abuses the trust of goodhearted young volunteers with lies that their time and money is going towards valuable conservation to reintroduce their captive lions to the wild.x 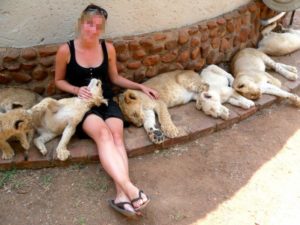 An ex- volunteer of Ukutula reports that lion cubs are passed around between volunteers and paying customers with no animal care experience, they are fed inadequate diets, and beaten into submission when acting naturally boisterous.x

Conservationists and animal welfare experts remain deeply concerned about the breeding practices used at Ukutula such as removing the cubs immediately after birth.ix  This unethical and inhumane process is known to cause great physical stress to both the mother and her cubs, yet completely legal under South African law.  Volunteers from Ukutula report lionesses are forced to produce about 2 to 3 litters of cubs each year.xi  This is extremely unnatural as in the wild a lioness will only reproduce cubs every second or third year.

Lions at Ukutula are sold to third parties once they reach around three years of age.

Ukutula is just one of the many lion ranches that act as a co-conspirator to commercialize lions as a product to be exploited.  Sadly, Ukutula is taking in significant sums of money from tourist and volunteers, which indirectly supports the abusive and barbaric industries connected to lion breeders.

Please ask Ukutula, to stop breeding lions intensively and to stop misleading tourist and volunteers to believe their ranch helps with lion conservation.

The government on South Africa: AModise@environment.gov.za

Please ask Ukutula, to stop breeding lions intensively and to stop misleading tourist and volunteers to believe their ranch helps with lion conservation.